I’ve been listening to the shows of Benjamen Walker since a year and a half. His shows are transmitted in the US by Chicago Public Radio but also by a number, as he calls it, enlightened radio stations. But you can also listen to him on the internet.

He travels around the world, recently he was in the UK, before that in Tunisia, China and Jamaica. On regular basis he is asked to appear to speak at conferences like the International Audio festival.
If you are interested in good different and independent podcast/radio goto his site on http://www.toeradio.org. 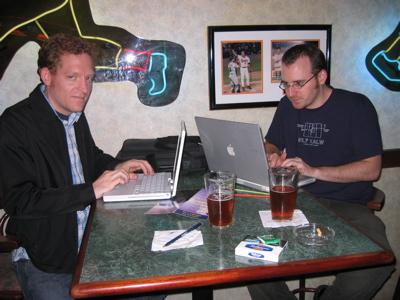 There is one problem and I’m worried; I haven’t heared the guy since Okctober last year. Where is Bejamen? Does anybody knwo know, please let me know.

I found this really nice blog from Tina Roth Eisenberg. She a native of Switzerland, grew up influenced by the renowned Swiss design and a lot of fresh air and works in New York.
Her blog just cries out “DESIGN” and is cramped with nice examples and links. It is a lot of fun, have a look at SWISSMISS.

Podcasting is about one year old now. Pretty mature for a technology what started as a hype. It raised the question with me; ‘What would you like to see in the next generation of Podcasting’.

How do I listen to Podcasts
I started listening to Podcasts on my PC, simple because I didn’t have a MP3 player. That was alright but I didn’t like the fact that I always needed my PC. I have WiFi, I have a laptop but it didn’t give me enough flexibility.

The next step for me was to buy a player. The result was that I could walk around the house listening to a Podcast. I tried using it in the car but most of the time I’m at work in the car. I’m either busy driving it or talking on the phone. Bottom-line, I was alright but I didn’t think it was a 100% success.

The third step was when I bought a Philips Streamium SL400i. This is a device that I can connect to my audio equipment and I can play and stream audio files from the internet or from a server in the house. This is the configuration which works for me at the moment. I’ve setup a server on which I have iPodder installed which downloads the Podcasts I want al day. When I get home I switch on the streamium, look at what Podcasts have come in, select the one I want and listen to it while I do other stuff.

So what would I like to see as a next step:
– First of all Podcasting should support chapters. You should be able to skip to the section in the Podcast you want instead of FF. Linked to content of the OPML file would be great.
– Podcast should be a multimedia experience. It should be possible that in the middle of a Podcast a picture is shown of either the artist which is being played, the Senseo Adam Curry is using or just something to explain something which is talked about in the Podcast. That would be great on the Streamiun because it is linked to the TV as well.
– iPodder should have an auto clean up function. Everything older than e.g. 3 weeks should be deleted.

Maybe somebody will make this possible.

Tdavid wrote an excellent piece on the rant between Adam and Dave. The comments are exceptional.
Read them, I’m sure there is more to come.

Today (May 26 2005) Dave Winer posted a reply on the pileup between him and Adam Curry.
In January Adam went to Florida to meet up with his friends to talk about the future of podcasting. Among those friends was Dave Winer who had been talking with Adam for weeks about going into podcasting business. After those meeting Adam made a sightseeing podcast where he sounded really frustrated. Something had gone wrong and Dave’s podcast sheds a different light on the matter.
Jummy.

Things are heating up between the Founding Father Dave Winer and the Podfather Adam Curry.
In his recent blog entry Dave is threatening to kick Adam ï¿½in the assï¿½.
Make love no war!

On April 29th Adam Curry finally presented us his long expected ‘strategy cast’. This was going to be the unveiling of the Holy Grail: the future of PodCasting. Was it really?

I’ve been listening to Curry from the first PodCast he made he made last year and I have been enjoying it. It has made me look for other PodCasts and now I’m listening to stuff like ‘The Theory of Everything’ of Benjamen Walker, ‘Earthwatch Radio‘ and ‘Whole Wheat Radio‘.
The fun of this new technology or movement is that it has nothing to do with the big business, big corporations or expensive infrastructures. It is the extension of the open source movement, blogging and means total democracy. Everybody can do it and people are getting into PodCasting because they feel they have something to say and not because they want to sell you something.

Last year, in the spirit of that movement, Adam Curry together with Dave Winer, setup an open directory where everybody could advertise their PodCast. The result was that PodCasting skyrocketed even more and you could read about it in every newspaper.
Soon after that the first cracks began to appear. Up to than Curry had been working mostly with Dave Winer, the inventor of the RSS feed which technology is the core of this movement. Curry went to Florida to meet up with his friends Dave and Ron Bloom to discuss ‘the future of PodCasting’. The PodCast Curry made after that meeting sounded as if something had gone totally wrong. The fact that the PodCast directory was handed over to Curry, all Curry websites were moved off Dave’s servers and Dave name is hardly ever mentioned by Adam indicated that they must have disagree on something fundamentally.

After the ‘strategy cast’ and the news about Adam’s radio contract with Sirius it is obvious that Ron and Adam are trying the steer the PodCasting movement back into the arms of the big corporations and where the money is. If you read the recent comments on Dave website it’s obvious that he wanted nothing to do with that. That maybe one of the reasons for the splitup.

Next step will be that Adam is going to decide, more than what he’s already doing, which PodCast we should be listening to and which PodCasts will be sponsored via his PodShow firm.
Thank God Sirius can only be received in North America and the World is a bigger market than just the US. Let’s make sure that PodCasting is not going to be like those other “great products” from the US, like Disney World, MacDonalds, Coca Cola & SUV’s.